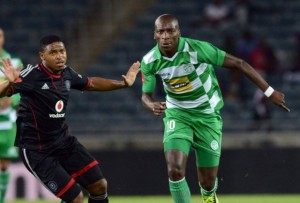 Bidvest Wits failed to keep the pressure on the Absa Premiership table toppers following a 2-1 loss to Bloemfontein Celtic at the Dr Petrus Molemela Stadium in Bloemfontein on Sunday afternoon.

The loss sees the Clever Boys in third place on the table with 32 points, four points behind league leaders Mamelodi Sundowns and one point behind second placed Mpumulanga Black Aces.

Celtic, on the other hand, move up to ninth place on the table with 20 points, only a point outside of the top eight.

The home side started the better of the two teams and saw the majority of the ball, but they struggled to break down a well-organised Wits defence.

The first shot on goal actually came against the run of play when a long-range effort from Elias Pelembe was well-saved by the Celtic goalkeeper.

As the game progressed the Clever Boys found their footing and controlled the flow of play.

The next chance on goal came on the half hour mark when Onismor Bhasera beat three defenders on the left flank before playing Sibusiso Vilakazi into space 16 yards out from the Celtic goal, but his shot was straight at the keeper.

Five minutes later Wits took the lead after a swift passing movement concluded with Pelembe passing the ball home from eight yards out.

Pelembe almost doubled his side’s lead in the 40th minute when an 18-yard shot from an acute angle on the left edge of the box struck the outside of the post.

Wits dictated terms for the remainder of the half, but were unable to find a second goal before the break.

The start of the second 45 saw Wits controlling matters, but Celtic were able to draw level five minutes in the half after a quick counter-attack.

Lerato Lamola broke into the box after a route one ball and with Moneeb Josephs coming off his line to close him down, the Celtic man squared for Thapelo Morena who tapped home into an empty net.

Celtic nearly took the lead in the 64th minute when a right-wing cross was met at the back post by Lyle Lakay, but he volleyed over from six yards out.

Wits were virtually non-existent in attack in the second half, but did manage a shot on goal in the 78th minute when James Keene met a right-wing cross, but volleyed wide from 14 yards out.

In the 92nd minute Josephs was lucky to escape a red card when Lamola broke through on goal and was brought down by the keeper inside the box. Josephs only received a yellow card, but did give away a penalty.

Musa Nyatam stepped up and converted from the spot to give Celtic their first league win since September 2015.