Mark Gleeson is not just one of the greatest football journalist but the most recognizable football expert on the African continent who has worked for different newspapers and magazines long before venturing into television commentating.

The most knowledgeable football guru who has won the respect of the continent where he is welcomed with a red carpet in every African country because of his fair analysis of a football match irrespective of who is playing and his peers have actually dubbed him the “Commentator’s Commentator!”

The gentle giant that is Gleeson has achieved a rare feat among local journalists by commanding respect not just among players globally, but even football federation Presidents various continental President from Issa Hayatou (CAF), Ahmad Ahmad and present Patrice Motsepe and even former FIFA President Sepp Blatter have expressed their utmost respect for the gangling fellow now residing in the fairest Cape.

Gleeson has been honored by global media houses for his refreshing ability among to call it the way he sees it. However, an even rare trait about Gleeson is that if a player or an administrator has done exceptionally well in their respective fields, he would say so without hesitation.

However, if anyone steps out of line of performa poorly, Gleeson is not afraid to throw brickbats in your direction but like a true professional that he is, would offer advice on how to improve!

He had always being a huge fan of football despite growing up in conservative Pretoria and as a kid, his father who also played the game, would occasionally take him along to watch legendary Arcadia Shepherds (which was his favorite club) at the now defunct Caledonian Stadium in Sunnyside near the Pretoria CBD.

He watched at close quarters, great players the Wegerle brothers (Steve, Roy and Geoff), Dave Herholdt, Charlie Naude, Spoedie Bronkhorst and both Roy Matthews and Stan Lapot who were amongst the best players in South Africa at the time before they both ventured into coaching.

“The early 1970’s were a very exciting for me as a youngster to go to the Caledonian grounds every second Friday. When my younger brother and I behaved well, our father took us to Johannesburg on a supporter’s bus and we would go watch big matches against teams like Highlands Park at Balfour Park.”

Gleeson is right, few people are aware that Highlands Park used to dominate the powerful all-white National Football League and gained a fearsome reputation as “The Lions of the North.” They had assembled an incredibly strong team that consisted of the likes of Stuart Lilley, Martin Cohen, Bobby Viljoen and Jimmy Joubert to mention just a few.

Mark received his break in the media during the early 1980 and first worked for the now defunct Sunday Star and Saturday Star and broke into commentary around 1990 with the SABC.

He was invited to be a panelist to discuss the African teams that were participating at the 1990 FIFA World Cup and having gathered a bit of knowledge about continental football, he was able to deliver expert analysis about not just the African teams but in every match, he commentated regardless of the region where they came from.

It was a game between Cameroon and Argentina at Italia ’90 when the Indomitable Lions had a historical win at the tournament’s opening game which was good for Gleeson who was then invited back a few more times and Cameroon went all the way to the quarter finals and that made his appearances on television a bit longer.

Following that magnificent display and his flawless analysis, invitations for his expert analysis and to do commentary on some of the local matches followed thick and fast and he never looked back.

Gleeson is a global citizen and has been exposed to the traditions and cultures of many countries where his knowledge of their day-to-day struggles makes him experts about the economic development of most countries on the continent.

In his opinion, the African game could not be developed without African economies working as one. If you are in a country with a poor economy and you do not have money floating around for sponsorships, that impacts negatively on football.

In his unbiased view about the state of African football, Gleeson feels that one cannot expect countries to be successful football wise if their economy is not developed.

There are neither short cuts nor any magic formula for African football even with Patrice Motsepe taking over as President of CAF, the general situation around Africa football is that the game will only prosper if Africa as a whole prospers.

“When I’ve got money which is not very often, my favorite holiday destination is Mauritius and I do not mind visiting that beautiful island with its stretches of white beach.

“Travelling is a great experience that I would recommend to anyone. In fact, I would advise anyone in journalism to travel as much as you can, attend as many matches and tournaments as you can and experience the different cultures in different places.

“I have learned different international languages Dutch, French and Portuguese even though I’m not fluent and I have also Studied German throughout my high school years.

“I consider myself very privileged and indeed lucky to enjoy what I do; I love my work and always look forward to what lies ahead for me in the day.

“If you wake up every day writing about football, talking to football people then it’s not difficult to be enthusiastic and enjoy what you are doing. I have to thank all of those who have helped me to get to where I am.”

South Africa should be proud to have produced a luminary like Gleeson who is without doubt the greatest servant of the beautiful game and hopes that this country would bestow an honor like erecting a statue for him or something for his general contribution to the beautiful game while he is still alive. 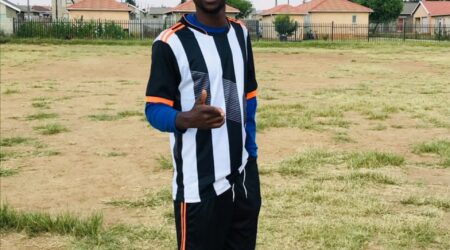