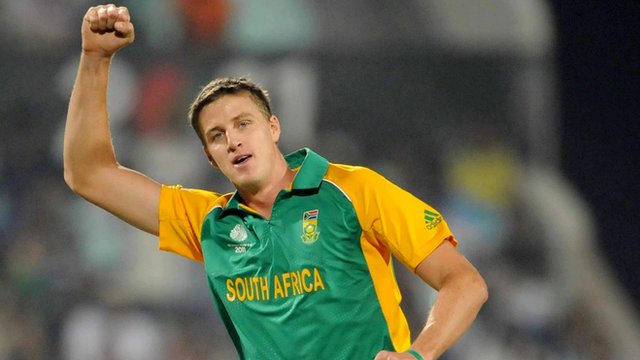 Morne Morkel and Simon Harmer bamboozled India with pace and spin on a tricky wicket but South Africa also suffered early blows in the third Test in Nagpur on Wednesday.

Off-spinner Harmer claimed four wickets for 78 and fast bowler Morkel took three for 35 as the Proteas bowled India out for 215 in the post-tea session of the first day’s play.

South Africa, seeking a series-levelling win, had plodded to 11 for two by stumps, setting the stage for an exciting battle ahead on a dusty and dry pitch at the VCA stadium.

Off-spinner Ravichandran Ashwin had opener Stiaan van Zyl caught in the slips for a duck before nightwatchman Imran Tahir was bowled by Ravindra Jadeja for four.

At stumps Dean Elgar was unbeaten on seven and skipper Hashim Amla had yet to score.

India were reduced to 125-6 after winning the toss, before the last four wickets added 90 runs that included a 48-run stand for the seventh wicket between Jadeja (34) and wicketkeeper Wriddhiman Saha (32).

Opener Murali Vijay top-scored with 40, but none of the other five specialist batsmen crossed 22 on a first-day pitch that already shows cracks and continues to deteriorate fast.

Morkel made up for the absence of his unfit speed partner Dale Steyn to negate India’s initial advantage of batting first, but then himself limped off the field while bowling his 17th over in the final session.

Harmer said he was happy to bowl on a pitch that helps slow bowlers and predicted the Test would be over before the fifth day.

“This wicket is not prepared to last five days, there is bound to be a result,” the off-spinner said.

“In South Africa we prepare pitches that suit our type of cricket. So this does not surprise us at all. But being a spinner, I like bowling on such wickets.” India’s batting coach Sanjay Bangar said it was too soon to predict the outcome.

“This is a challenging wicket to score runs on,” said Bangar. “This has been a low-scoring series, but it is too early to say how this match will go.

“There is a lot of time left in the match, so anything can happen.”  The Proteas, who would have batted had they won the toss, removed openers Shikhar Dhawan and Murali Vijay in the morning session which ended with India on 85 for two.

Dhawan and Vijay put on 50 for the first wicket before South Africa hit back to remove both batsmen in the space of 19 runs.

Left-arm spinner Dean Elgar took a low return catch to dismiss Dhawan for 12 before Morkel got rid of the settled Vijay for 40.

Vijay smashed Harmer for the first six of the match and also hit three fours before he was trapped plumb in front of the wicket by a full-length delivery from Morkel.

Cheteshwar Pujara, who was unbeaten on 18 at lunch, added just three more after the break before playing back to Harmer to be leg-before.

Ajinkya Rahane brought up India’s 100 with a six off Harmer but his off-stump was sent cartwheeling by Morkel when he reached 13.

Morkel then had skipper Virat Kohli caught behind by Dane Vilas for 22 and Harmer had Rohit Sharma caught at short-leg for two to leave the hosts reeling on 125-6.  The tourists, who lost the first Test in Mohali before the rain-hit second game in Bangalore was drawn, need a win to take the series into the decider in New Delhi starting December 3.