Canoeing is a sporting code that a Sowetan matriculant as another form of giving back to his community as he trains boys and girls of all ages how to handle some of the big waves and challenges that come with being a canoeist.

Benjamin Mnthonintshi is a 20-year old young man from Klipspruit in Orlando Soweto who describes the water sport as something that has taught him life skills and empowered him to be able to survive should he find himself in a precarious situation like being on the verge of drowning.

“First Rand Support is our sponsor that bankrolls club activities as well as logistics,” said Mnthonintshi. “They also sponsor major tournaments like the Fish River Canoe Marathon in ‘Gqeberha’ and many others in coastal cities like KZN, Mpumalanga and Cape Town.”

Grooming phases for all participants starts with swimming lessons that are offered by another member of the club who handles all swimming related matters.

“Once a participant receives the green light he or she is moved to the a phase where we offer membership forms and formally welcome our athlete to the rivers/dams and introduce them to our canoeing boards and ‘pins’ used to paddle the water side to side. 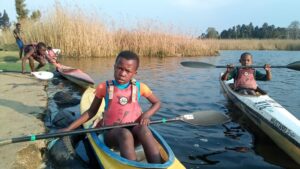 “The boat also consists of two paddles which allows participants to control the movement of the boat in the water.

“We are provided with different boat sizes like the (kayak 1) which we usually use to train our beginners that then also allows us to calculate the progress of our athletes.

“And based on the performance and adjustment we then gradually allow our players to utilize the bigger boats like the “kayak 2′ and the ‘Attacker’ which takes on two athletes per boat.

“As a young athlete and also still competing, I’m very much grateful for the support we receive as a club from the parents of our club members because this allows them to gain much needed experience in the water.

“The majority of them now have between three to four years of experience in canoeing. Those are some of the little things that make me proud as a young educator seeing progress and growth in the sport.

Like any other sporting activity canoeing has its own challenges like the lack of recognition and support. Another major challenge is that some dams are usually found to be dirty like the one the team uses for training called “Orlando Dam.

But with Johannesburg being a metropolitan city there aren’t any dams or rivers to utilize however we are fortunate enough to have important features like our life jackets which protect us from drowning whenever we challenge the water.