Speaking Tswana, dancing Pantsula and playing soccer are pretty normal things – except when you are the White son of a respected Afrikaner farmer in 1980’s South Africa. Caught in the rip currents of apartheid, Erasmus struggles to find his place in a school that expects him to play rugby, parents who condemn inter-racial relationships, and a justice system which crushes equal rights at every turn. When his lifestyle threatens to tear his family apart and land him in prison, Erasmus is forced to make impossible choices to keep everyone else happy. Through it all he finds freedom on the soccer field, where he and his friends start their own team, and try to make a difference in a world that refuses to listen – Review Soccer Farm.

Growing up on a farm in the iron mining town of Thabazimbi in the Waterberg area of Limpopo during the early 1980’s as a Afrikaner boy – Lourens Erasmus – was naturally expected play rugby which was the pre-dominant sport among his peers.

But while growing up in the Ysterburg where one is surrounded by the Witfontein and Boshofberg mountains while the majestic Kransberg looms large in the background as far as the eye could see, many kids engaged in the scrum and perfected their rugby tackling on gravel grounds.

Perhaps there was something wrong with him. But while most kids aspired to emulate drop goal king Naas Botha, Erasmus her-worshiped the likes of the late Pule “Ace” Ntsoelengoe, Marks Maponyane, Teenage Dladla and many football stars of the Kaizer Chiefs club during that era.

“I befriended the son of our farm worker and pretty soon we became inseparable,” says Erasmus. “We decided to establish our own football club in the farm inviting teams from the mining area and some of the surrounding farms to play against.

With the dream of turning professional and inspired by the likes of Ntsoelengoe, Dladla and even Moroka Swallows legend Ace Mnini, they became quite a formidable club that soon dominated social challenge games around the entire area!

“Things have changed drastically from those halcyon days to how the game is played today,” said the author of two published books “Soccer Farm” and soon to be launched “Yellow Nation” in dedication of his favourite club Mamelodi Sundowns.

“Today the modern game has become scientific and there is a lot more attention paid to even the finest detail which is unlike during our amateur days where we played for entertainment which was much more fun than the direct approach that is the norm today.

“On the farm we attracted very large crowds every week and it kept the people happy on the small rural community where I grew up. Today football is much more tactical and it involves a lot of planning and is run more like a business where only qualified people run the show.”

Not everyone was cut out to crack it big in the game, but all the kids around the farming community of Thabazimbi ever wanted was to engage in the shibobos and dribbling in an attempt to emulate their heroes like Fetsi Molatedi or Aubrey “The Great” Makgopela!

“Our parents forced us to go to school and today we are thankful that there’s something to fall back on.” says the football fanatic and published author.

It was initially not in his plans to publish “Soccer Farm” due to the fact that he was just writing down incidents from his childhood experiences and reflecting on his life in a country where people are painfully judged through the colour of their skins and not through their character.

He shared the manuscript with friends and family and the feedback constantly inspiring and most told me to get the book published.

Growing up playing and hanging around mostly with Black kids, Lourens was considered something of a pariah and inevitably got rejected by his own community for daring to play soccer (a game considered by some Afrikaners as inferior to rugby) and socializing with black people. 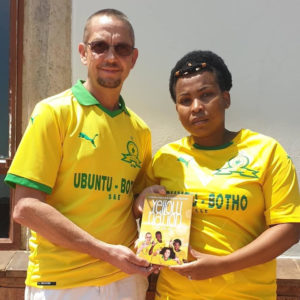 The story of “Soccer Farm” revolves around his experiences on and off the field with his best friend Bareng. The book depicts the tragedy, the hate, the frustrations, the fear and complexities of South Africa during the apartheid era and all happening in the football context.

It also beautifully portrays friendship and love across the colour bar where his personal friend was Bareng and he fell in love with a Motswana lady – a relationship that was frowned upon and inevitably led to being ostracized by his community.

Erasmus is an ardent Mamelodi Sundows supporter since 1989 and his second book “Yellow Nation” will be launched towards the end of November 2020 which talks about his experiences as a Sundowns supporter and what a positive influence it had in his life. 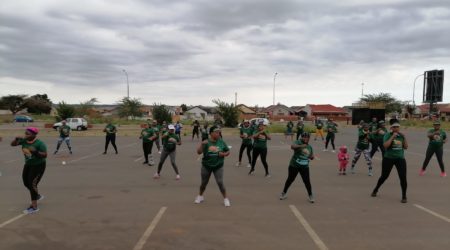 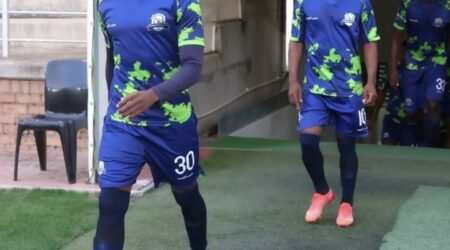 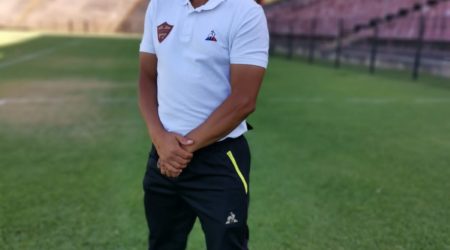