The time has come for SAFA President Danny Jordaan to flex his muscles, wield the big stick and lash a couple of lazy officials within his organization on their buttocks for dropping the ball at a time when we expect everybody to keep their eyes on the ball.

I am aware that the Department of Home Affairs has been captured, but that does not exonerate some lazy officials from abdicating their duties and failing to secure the necessary documents that would ensure that Sergio Marakis and Joel Untersee become legible to play for South Africa.

Nigeria has boosted their national team with Germany born Leon Balogun, Ola Aina and Tyronne Ebuehi and are still chasing Hoffenheim’s Kevin Akpoguma who is still hesitant and unsure whether to commit to the West Africans or play for Germany.

Ivory Coast pursued, cooed and finally persuaded Wilfred Zaha of Crystal Palace to abandon his dreams of playing for England and return to his fatherland, which he has done with positive results for the West African country that gave us Didier Drogba and Yaya Toure.

Pierre Emerick-Aubameyang was also persuaded from featuring for France and instead to pledge his loyalty to his father-land – Gabon – and we have all seen his contributions to the Gabonese national team.

Adam Ounas who plays for Bordeaux and is chased by the French, turned them down and pledged his loyalty to Algeria, who also pursued him like a priceless bride and the player has now become a vital cog in the line-up of the Desert Foxes.

Morocco usually announces a squad of 23 players for national duty, and out of them all, at least 17 of them were born outside Rabat, among them Moubarak Boussoufa, Karim El Ahmadi, Hakim Ziyech and the Amrabat brothers – Sofyan and Nordin – as well as Mehdi Benatia.

I can go on but what gets me hot under the collar, is that there are thousands of players born in South Africa or even abroad for that matter, yet who have an attachment to their Motherland but for some strange reasons, there is very little overtures to them.

To his credit, Stuart Baxter has tried and I know for a fact that despite his failings as a human being, he has spoken to several players in Europe and the said players agreed to play for South Africa. But when there is less interest in aggressively finalizing the matter from officialdom, there is very little else that the players on their own can do.

Joel Untersee plays for Italian side Empoli as a central defender and described by the Italian media as someone who is as tough as they come. He was born in Roodepoort in the West of Johannesburg and qualifies to play for South Africa and just imagine if he was brought here and paired with Rivaldo Coetzee for example, at Bafana Bafana?

Then of course, there is Sergio Marakis also born in Johannesburg but playing his football for Portuguese Premier League side Nacional where he runs their engine room as a box-to-box grafter, hassling, tussling, pestering, harassing, winning the ball and then distributing it with unerring accuracy.

I’ve since discovered that Baxter spoke to the duo and several others and they have all agreed to come and play for Mzansi. However, some official tasked with the duties of applying for their necessary documents is either guilty of dereliction of duty or is deliberately and purposely sabotaging the country.

When Kamohelo Mokotjo applied for Dutch citizenship and we realized that he would no longer be eligible to play for Bafana, an effort was made to reverse his decision and within 48-hours, Mokotjo had retained his South African passport!

Now why has it taken a year and a couple of months to obtain documents for Untersee and Marakis among others? I maintain that either Jordaan fires the lazy officials that had dropped the ball or command them to take their pants off, and then with all his might, lashes them on their buttocks. 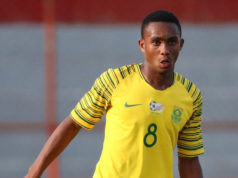