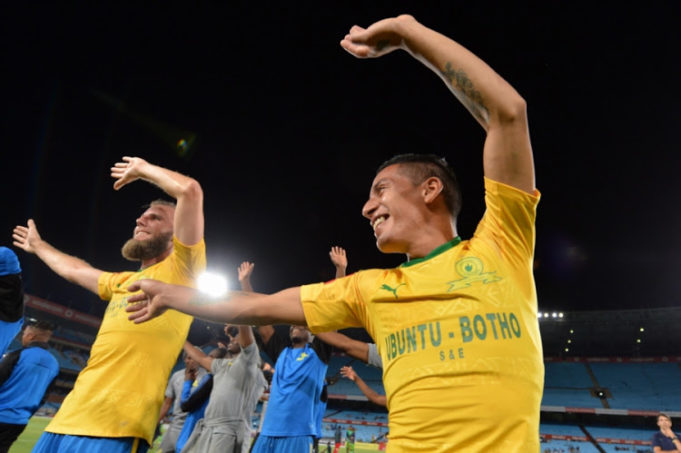 Hips don’t lie, and if you do not believe that statement, just ask Isabel Mebarak Ripoll, better known globally and in musical circles as “Shakira,” and she will tell you she is so sexy that she is every man’s fantasy.

Now, just like Shakira’s contention about hips, statistics as well do not lie. On the eve of a top of the table clash between Mamelodi Sundowns and Orlando Pirates at the Loftus Stadium on Saturday in Tshwane, it is perhaps advisable to peruse the results of the two clubs in their last 10 meetings.

It did not matter whether the clashes have been at Orlando Stadium, Lucas Masterpieces Moripe or at the home of the Blue Bulls – Loftus –  Sundowns has shaded eight of the last 10 clashes, including a 6-0 annihilation that resulted in the exasperated, long suffering Pirates followers ripping out television broadcast cables and trashing the rugby stadium.

The statistics show that Pirates have won only two of the last 10 meetings and there has not been any stalemate during that period, giving a clear indication that there is no let up whenever these two giants of South African football meet and signs are that this could be another high scoring match.

Granted, Pirates have been in an enviable, if not impressive red hot form of late, brushing aside opposition like swatting away irritating flies. Even perennial rivals Kaizer Chiefs were in actual fact lucky to escape with only a narrow 2-1 defeat, such was Pirates’ dominance of their encounter.

Agreed, past results will count for nothing but you just cannot ignore how much Sundowns have dominated the Buccaneers, especially since Pitso Mosimane took over as coach and somehow he seems to fashion out a way of getting the better of the marauding Buccaneers.

It came as no surprise when his former player Bongani Zungu posted a tweet crediting Rulani Mokwena, the Pirates assistant coach for transforming the Buccaneers and turning them into a formidable outfit, like he did while he was still at Sundowns.

Although Zungu went on to delete the tweet and apologized for his lack of tact, it was not before veteran Benni McCarthy had blasted him for being a silly and ungrateful twerp, Mosimane has throughout all this brouhaha been calmness personified.

“I do not believe that it was Bongani Zungu that composed and posted that infamous tweet,” said a calm Mosimane at their Chloorkop headquarters on Friday. “I know that boy pretty well and I prepared him for a career in Europe.

“If you read that tweet carefully, I have just been amazed by the level of the language, which made me doubt that it was him that wrote that tweet. I think someone is trying to play mind games. But it will not work with me.”

Mokwena successfully took Kaizer Chiefs coach Giovanni Solinas off his stride prior to the derby against Pirates, claiming the current Amakhosi technical team lacked the ability and the tactical awareness of former coach Steve Komphela.

It was indeed a blow bellow the belt and ruffled the Italian’s feathers so much that he took his eyes off the ball, infuriated by Mokwena’s jibe that he even tinkered with his line-up and played straight into the hands of his adversaries who could have buried him under an avalanche.

But trust Mosimane to see through the ruse and you can rest assured that this is a game that will restore the image of what South African football is all about.

Justine Shonga and Augustine Mulenga have been unstoppable as key figures in the Pirates line-up, creating, scoring and even confusing opponents with their trickery and lightning speed that makes them difficult to contain.

But Sundowns remain the only unbeaten side in the current league campaign and with Uruguayan Gaston Sirino leading their line assisted by Lebo Maboe and young Phakamani Mahlambi, the game will be lit, no doubt.

And then of course, there is the Jeremy Brockie factor after the New Zealander has broken his duck, finally scoring an official goal after almost a year in the gold and green colours of Sundowns and who knows if this could open the floodgates from the bearded Kiwi.