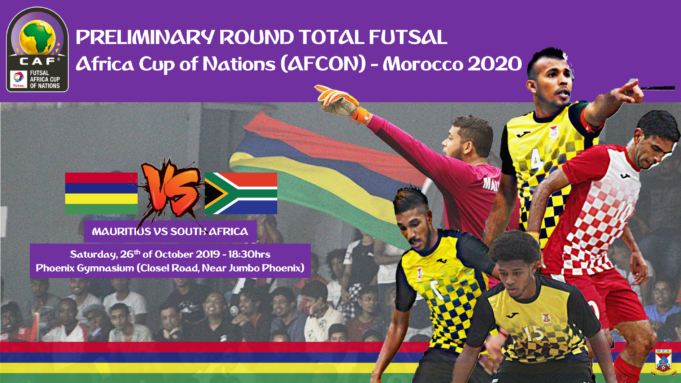 The CAF 2020 Futsal Africa Cup of Nations was on Wednesday thrown into disarray when the Mauritian government allegedly ordered their FUTSAL national team to withdraw from the ongoing tournament in Laayoune in the disputed territory of Western Sahara.

Mauritius had replaced South Africa who had withdrawn from the tournament in solidarity with the Sahrawi, who have been denied their right to self -determination and independence by Morocco since the territory was ceded by Spain back in 1966.

The South African Football Association (SAFA) had actually written a letter to the Confederation of African Football (CAF) requesting the continental organization to switch the tournament to any of the recognized Moroccan cities like Rabat, Casablanca or Marrakesh.

However, when CAF failed to respond to their request, SAFA pulled out of the tournament even though they risked a possible ban from two future editions of the tournament and a reported US$65 000 fine, but satisfied that they were keeping in line with the South African government’s policy to support Western Sahara who had given the ANC’s Umkhonto we Sizwe material support during their own fight for liberation against apartheid South Africa.

Algeria also joined the political fray and condemned neighbors Morocco for proceeding to stage the tournament in Laayoune, a disputed area of Western Sahara in total defiance of United Nations who in 1988 declared that the Sahrawi had the right to independence.

But CAF now under the rule of FIFA Secretary General Fatma Samoura who has been seconded to Cairo as General Delegate, elected to ignore the fact that Western Sahara was a disputed area and instead took an unpopular decision to install Mauritius as a replacement for South Africa.

In their opening match this week, Mauritius lost 4-2 to Equatorial Guinea but have been since ordered to return home by their national government, to which FIFA and hosts Morocco are allegedly refusing to foot their hotel bills and purchase their return tickets home.

According to www.thomaskwenaite.co.za sources, Mauritius, now stranded in Laayoune, find themselves between a rock and a hard place as Morocco are allegedly using strong-arm tactics in an attempt to force them to stay and participate as their withdrawal will embarrass the hosts whose intentions of jabbing the middle finger to an incredulous world by defiantly playing in occupied and disputed Laayoune seems to be backfiring badly in their faces.

Mauritius is scheduled to play against Libya on Thursday evening but it seems like it is a foregone conclusion that Libya would be awarded a walk-over and the vital three points with possibly a score of 3-0 as a bonus.

There are unconfirmed reports that both Angola and Mozambique are also under pressure from their respective governments to also withdraw and show their solidarity to the Sahrawi and should the two southern African countries withdraw, the tournament would inevitably collapse.

Western Sahara was colonized by Spain until 1966 when they ceded control of the territory at the instructions of the UN. But then both Mauritania and Morocco started fighting for the control of the area, claiming it was part of their own countries and had been artificially cut up by the colonizers.

Historians claim that the discovery of large deposits of phosphate in Bu Craa in the Northern part of the Spanish Sahara made the province a hugely economically viable entity for any country that could firmly establish its control over the area.

However, decades of social and economic changes caused by drought in the arid area and the impact of the phosphate discovery resulted in an increase in national consciousness and anti-colonial sentiments, leading to a guerilla insurgency waged by the indigenous Sahrawi, calling themselves the Popular Front for the Liberation of Saguia el-Hamra and Rio de Oro (Polisario Front).

The Polisario declared a government-in-exile of what is known as the Saharan Arab Democratic Republic which is recognized by more than 70 countries, global organizations such as the UN, AU, FIFA and they have a long-standing alliance with the African National Congress in South Africa.

It is strange that the very same FIFA, which during 1997 when South Africa was due to play the Democratic Republic of Congo in a 1998 World Cup qualifier in Kinshasa, ordered that the match be played in neutral Lome in Togo due to political instability in Kinshasa.

The same Togo incurred the wrath of CAF when they setup camp in Pointe Noire ahead of the 2010 Africa Cup of Nations in Angola. A week before the start of the tournament, the Togolese decided to drive by bus through the disputed area of Cabinda into Angola and were ambushed by rebels fighting for the liberation of Cabinda.

Three people were killed and Togo’s number one goalkeeper remains crippled to this this day. At the time, many people felt then CAF President Issa Hayatou was heartless as he berated Togo, but the truth is that CAF and FIFA supported the Un and AU when it comes to politically disputed areas.

But strangely, FIFA is now silent about Morocco who are riding roughshod over Western Sahara in defiance of UN resolutions in a clear show of force by illegally suppressing the self determination of the Sahrawi.