The rapid spread of the Coronavirus across the continent has many countries on edge and several are giving subtle hints indicating that they wish the Confederation of African Football (CAF) could call off the upcoming African Nations Cup qualifiers pencilled for the last week of the month.

CAF has issued a statement calling for calm and informing member associations that they are closely monitoring the “evolution of the Coronavirus (COVID-19) around the world and stresses that according to the World Health Organization (WHO), no African country to date has been declared a high risk,” reads the statement.

But late on Wednesday, WHO declared the Coronavirus a pandemic, which saw a few countries showing signs of edginess, with Gambia coach Tom Saintfiet expressing a wish that CAF should postpone the AFCON qualifiers due to the fact that he could not locate seven of his players based in Italy.

Gambia is scheduled to play Gabon in Libreville on March 26 and then play them in Banjul four days later!

The Ministry of Health in Mozambique is alleged to have proposed to the football federation to seriously consider calling off the upcoming AFCOn match between the Mambas against Cameroon, where two people are reported to have contacted the virus.

Italy had on Monday announced that the entire country – which is Europe’s worst affected by the coronavirus – was in a lockdown as it battled gamely to contain the outbreak while football in Spain is played behind closed doors.

The Kenyan Ministry of Sports, Culture and Heritage issued a traveling ban in an attempt to safeguard the country and public at large from the rampant virus.

“The Ministry wishes to inform you that there will be no more travel for international events until further notice, at lest for a month” read a statement issued by the Principal Secretary of Sports. Arts and CultureJoe Okudo on Wednesday.

The travel ban is likely going to affect the Harambee Stars upcoming double-header AFCON programme against Cooros on March 26 at home and March 31 at the Indian Ocean island.

In South Africa, where 13 people have been identified to have been affected by virus, the Premier Soccer League has issued a ban on players and match officials shaking hands prior to the start of domestic matches.

There were concerns around the World Football Summit Africa which has attracted speakers from all over the world to Durban where it gets underway on March 18, but organizers have also issued a statement that it is still going ahead as scheduled as the government has not yet indicated otherwise.

However, the government of Botswana officially issued travel restrictions on all their national teams and the hosting of international sporting events with immediate effect on Wednesday.

“The decision was made considering the serious consequences of infection of any of our sports persons and the risk of the entire nation,” reads a statement issued by the Botswana National Sports Council CEO Falcon Sedimo.

“It is therefore important that Botswana sport plays its part and acts responsibly in the midst of this health crisis. Travel restrictions will therefore remain in force until further notice,” he concluded.

These restrictions are likely to affect Botswana’s senior national team the Zebras’ AFCON double-header programme against Zambia in Lusaka on March 23 and in Gaborone on March 31.

It will also affect their U-17 Women FIFA World Cup programme as the Batswana girls lost 1-0 to Morocco and are scheduled to fly out to North Africa for the second leg tie this week!

“CAF has been informed of the restrictive measures taken by authorities in some member association states and is in contact to find solutions on a case-by-case basis, with the option of the organization of matches played behind closed doors,” reads the CAF statement issued on Tuesday.

In addition, CAF has dispatched a delegation from their Medical Committee to visit Cameroon ( who would be hosting the CHAN tournament between April 4-25) to assess all preventive measures taken by the Local Organizing Committee. 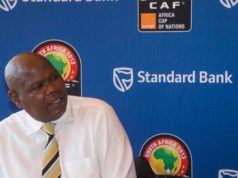